Ingredient of The Week~~Fresh Masa~~Masa is a Spanish word meaning "dough".2 min read 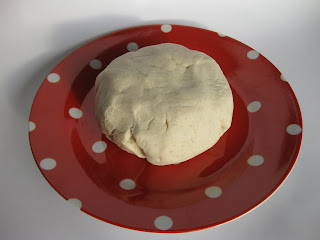 Masa traditionally made from a field corn, called maiz blanco or “cacahuazintle” [kaw-kaw-WAH-SEEN-til] which was dried (it can be both sun dried and fire dried), treated with a lime water solution or lye, then cooked and finely ground. The final product can be mixed with other ingredients to make tortilla or tamales. Masa can be purchased fresh or dried (dried finely ground masa that is turned into a flour id referred to as Masa Harina).

There are many tortillarias in San Diego and in the east county that carry fresh masa (as well as fresh masa premixed for making tamales).

Although dried masa can easily be used in its place the results can be a world apart. Dried masa can easily go rancid and develop off flavors. That is not to say that fresh masa does not have its flaws as well. You want to make sure you use your fresh masa the day you use it, as it can sour over time; or you can freeze (but then that kind of defeats the point of using something fresh)

Here is my recipe for homemade tamales, using fresh masa.

Beat lard, sugar, salt and baking powder using an electric mixer at medium speed until combined, till light and fluffy.

Divide masa into 4 equal portions and add 1 portion at a time into the lard. Beat till fully incorporated before adding the next portion. Continue till all the masa in incorporated.

Slowly add broth to the masa. Beat until dough is a smooth

Soaked husks in warm water until pliable (about 20minutes.) Then pat dry with towels. Rip 2 or 3 husks length wise into thin strips. These will be used to tie tamales shut. You can also use butchers twine.

Scoop masa into a large plastic bag, push into one corner of the bag and cut off the tip.

Squeeze masa onto the husk, pressing the bag against the husk, in 3 or 4 strips. Add about 1/2 tsp of your chosen filling. Fold one edge of corn husk to the center and pull into filling (like making sushi roll). Then roll filling over its self. Repeat with remaining corn husks, masa and filling.

Cook tamales in a tamale steamer or in a pot with a steamer insert.

Steam tamales for about 35 to 40 minutes. They are done when the masa no longer sticks to the corn husks when tamales are unrolled.

This site uses Akismet to reduce spam. Learn how your comment data is processed.